We received an email from Peter Federico this month asking if we could consider making a donation to Crohns and Colitus UK. Its a worth charity so £100 donation ws made.

This month we have made a £100 donation to Cancer Research as part of our on-going charity campaign.

ACU is registered animal charity based in Uzumlu, Fethiye and provides daily care for approximately 150+ local street animals. There aim is: A reduced but healthy population of street animals. This work is done entirely by volunteers and funded by donations. Lie Detectors UK was asked by Brenda Singleton to make a donation towards a dog that needed surgery.

Charity Donation to the Lupus UK

Today we made £100 donation to Lupus UK in memorandum of Andra Krishnan after being contacted by her son, Demetrius. You may not have heard of Lupus however its more common than your realise and is a incurable immune system illness, probably genetic in origin and mainly suffered by females. It can affect any part of the body and that’s the danger. Lupus can produce many symptoms and family doctors often fail to recognise it. Meanwhile, a number of major organs can be damaged in an irreversible way. Read more here https://www.lupusuk.org.uk/

This month March our chosen charity that has received £100 donation is the National Autistic Society. Matt Ryan and his son Sammy suggested the worthy charity, Sammy is a great supporter and even goes as far as selling his old toys to raise money for the Society, we could all learn a lot from young Sammy, keep up the good work young man. Proof of the donation below and a thumbs up from Sammy..

This month we were asked by David Clark to make a donation on behalf of his late father in law Mike Andrews who passed away with the awful disease. We make donation from this referral page here https://liedetectors-uk.com/octopus-energy-referral-code/

When purchasing a new Tesla one of the only benefits you can get is 1000 free SuperCharger miles by using a Tesla Referral Code, this cant be added at a later date. I love our Model 3.

You can use my referral link to get 1,000 free Supercharger miles on a new Tesla: Click below
https://www.tesla.com/referral/jason96330

If you do use this code I will make a charity donation, I feel strongly that what you give always comes back !

Teslas goal is to build the best clean energy products and to help Tesla owners share their excitement and experiences with others. As an owner, the Referral Program allow you to earn awards every time your referral link is used by your friends and family when they transition to sustainable energy and grow our community and they gain awards of 1000 miles to use.

Orders for a Tesla car will need to be placed by accessing the Design Studio through your unique referral link for you both to earn referral awards. Note that referrals can’t be added after an order is placed or at time of delivery and is not a code that is entered at time of purchase.

Download the Tesla app to start sharing your referral link and track the status of your awards in the Loot Box once you have bought a car.

Cars
You and anyone using your referral link can each earn 1,000 miles of free Supercharging with the purchase of a new Tesla car — designed to be some of the safest cars on the road. Each car referral also gives you a chance to win a Model Y monthly or Roadster supercar quarterly. Owners who already have free Supercharging get two chances to win.

If you have stumbled upon this blog and want my services for a Lie Detector Test click here for the home page. Thanks Jason 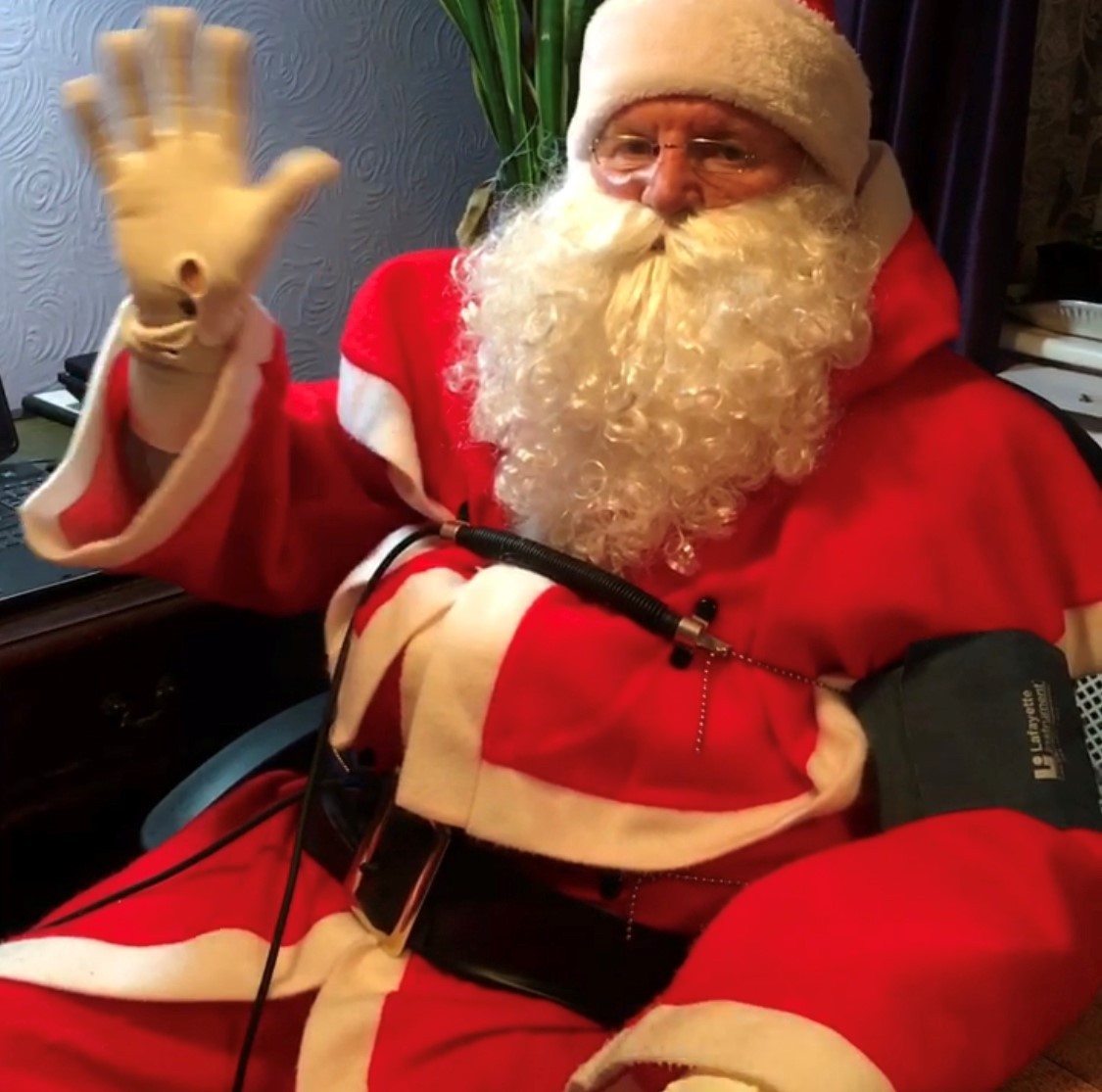 Santa Claus: Real or Fake? Find Out With Our Lie Detector Test

Do you believe in Santa Claus?

It is the most common question people ask each other during the holidays.

While some people believe in Santa Claus, others don’t. Most of the adults know that Santa Claus is not real, but the kids are still oblivious about it.

Almost every parent lies to their kids about Santa Claus. They make them believe that Santa is real and he is going to give them presents if they behave.

Kids believing their lies, try to be on their best behaviour during Christmas. They prepare a list to put it in a sock for Santa to see.

Santa Claus – A Truth or A Lie?

Nowadays, kids have become very smart. They Google all the stuff they don’t know. So you will hardly find any kids who believe in Santa these days.

To find out the truth, we conducted a fun lie detector test on three kids with the consent of their parents to know if Santa is real or not. The results of the text will leave you astonished.

Alisha is a ten years old girl from Liverpool. She loves to celebrate Christmas with her family. This year, she celebrated Christmas with her parents and grandparents. She was the first candidate to undergo the lie detector test. When we asked her if Santa Claus is real or a lie, the answer was pretty shocking. She said that Santa is real and he gave her a Harry Potter Diary this year. The lie detector test result showed that she was telling the truth. Although Santa is not real, Alisha believes that he is real and she told the truth. When we inquired with her parents they told that they secretly gave her a Harry Potter diary under the pretence that it was from Santa.

Harry is a seven years old boy from Leeds. This year he celebrated Christmas with his parents and little brother Sam. He was the second candidate to undergo the lie detector test. When we asked Harry if Santa is real or fake he came up with a different answer. He said that Santa is not real but he lies to his little brother about it. The lie detector test showed that Harry was telling the truth.

Ed is a 12 years old boy from Manchester. He was the third and the last candidate to undergo the lie detector test. We asked the same question to Ed to which he answered that Santa is not real, he is just a made-up story. But he still likes to pretend that he is real so that he can still get the presents every year. The lie detector test came out positive stating that he is telling the truth.

After conducting the tests on different kids, we concluded that most kids already know the truth about Santa. There are only a few kids who still believe that he is real. Most of them are girls. Boys catch on the truth from a pretty young age compared to girls. So parents need to be careful around their kids when they try to tell all the stories about Santa. As your kids already know the truth, they can easily catch your lies. Whilst you probably wont need a lie detector test to ascertain if Santa Claus is real you can contact us here to discuss your issue and see if we can help.

We were contacted last week by Mrs Jones about a potential Theft in London, she had lost her mother’s diamond ring, she was hoping it had been mislaid but had searched the house.

She explained her son had a history of stealing however for the last few years had been good, and has held down a job and is doing well, however due to his past history she wanted him to take a lie detector test for theft of the ring. For us this is a great test to run, allowing us to achieve maximum accuracy on a single issue test, it’s very black and white, you either stole the ring or not.

As with all theft cases we like initially the person you want to test to be informed, over twenty-five percent of our theft cases never go ahead. A guilty person will often agree to take a lie detector test and then back out at the last minute. So it’s only right that you use the threat of a polygraph test to try and get either a confession or the stolen goods back.

In this case the son was happy to take a lie detector test for the missing ring to put his mother’s mind at rest. It was booked for Friday night as we do evening appointments at out Maidstone HQ so time off work isn’t needed.

A great result without needing a lie detector test, it can’t have been easy for the son to own up so you have to respect that, the main thing is Mrs Jones getting her mother’s diamond ring back, a very sentimental piece of jewellery. A good result for the theft in London.

If you have been a victim of theft, or even been accused of stealing and need to prove your innocence get in touch today and discuss your case with a qualified polygraph examiner and find out why Lie Detectors UK has been voted no1.

After switching to Octopus Energy using our link Maggie Hastings emailed and asked Lie Detectors UK to make the next donation to the Alzheimers Society in memory of her mother who passed from this terrible and cruel disease. We were more than happy as its such a rewarding charity.

I do hope this email finds you safe and well during these unprecedented times.

My name is Sam Edwards and I am the Community Fundraiser for Kent and East Sussex at Alzheimer’s Society. I saw that you recently made a donation of £100 with the reference ‘Maggie Hastings’ and so I wanted to get in touch to say a huge thank you for sending in this money. At times like this, our support for people affected by dementia is more important than ever. Of the 850,000 people with the condition in the UK, 700,000 fall into the Government-specified vulnerable category which will only serve to exacerbate the feelings of isolation and loneliness that many people with dementia have reported feeling. Your generous donation at such a difficult time is so greatly appreciated and every penny means we can continue to be there for people affected by dementia, wherever they are and whenever they need us.