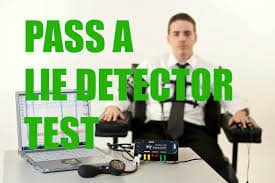 In the UK we estimate 10% of examinees sitting a lie detector test will attempt to cheat which we call ‘countermeasures’. Fortunately, these attempts are very easy to pick up by a trained examiner. Most would research ‘how to pass a lie detector test’ using the internet and find a confusing amount of false information and not know what would work. Below we look at the studies into people who cheat when taking a lie detector test and whether it actually helps. Personally as an examiner, I can tell you, it is obvious when someone attempts countermeasures on a Lie Detector Test.

Human beings hate to make mistakes. When we make them, we feel bad about ourselves, and we look less than competent to the rest of the world. When polygraph examiners make mistakes, the results can sometimes be quite serious, even devastating, for our examinees. Consequently, most examiners approach their work in a sober and conscientious frame of mind, to avoid those mistakes.

It is not easy to give a lie detector test, even under the best of conditions. It is all the more difficult when an examinee is trying to beat you. In addition, there is more and more information available to those examinees. We all are familiar with the names George Maschke and Doug Williams, two people who are actively trying to make it more difficult for us to do our jobs. https://www.bloomberg.com/graphics/2015-doug-williams-war-on-lie-detector/

Although Maschke has a personal bone to pick with our profession, and Williams is only interested in making a quick buck, both are telling people that they can “beat” a polygraph test by the judicious use of countermeasures. Our profession has taken this threat quite seriously – just look at the speakers and topics at any continuing education seminar. They usually include a presentation about countermeasures and how to spot them. How big a threat do Maschke and Williams pose? Perhaps not as big a threat as some people think. The scientific research about the effectiveness of countermeasures tells an interesting story. Two major studies address the issue. The first is an experiment that was published in Polygraph about twenty years ago.

In a major research study we prepared written material for both guilty and innocent subjects in a mock crime experiment. That material contained comprehensive information about the Control Question Test theory and gave several examples of control and relevant questions, so that subjects could tell what types of questions were being asked. They were shown examples of polygraph tracings and learned what scorable responses looked like on a polygraph chart. There were also detailed descriptions of countermeasure techniques, with instructions about how and when to use them in order to “beat” the test. At the end of the experiment (which spanned many months) we found that we made accurate decisions (DI or NDI) 95.5% of the time for subjects who had not read those materials. For subjects who had read them, we were also 95.5% accurate. Reading about polygraph theory, techniques and countermeasures had no effect whatsoever on subjects’ ability to “beat the test.” In spite of those findings, concerns about countermeasures have grown, primarily due to the large amount of information on the Internet. Although Doug Williams’ booklet is laughably simplistic, the information on Maschke’s website is comprehensive and, for the most part, accurate. Many polygraph professionals feel that people who have that information have a good chance of using countermeasures effectively. Rather than arguing or speculating about the effectiveness of Maschke’s attempts to pull the rug out from under us, a couple of scientists recently conducted an experiment to answer the question, “Is George Maschke actually Lex Luthor or is he Huckleberry Hound?” The researchers essentially replicated my dissertation research. However, in place of the instructions we had prepared for our subjects, they went directly to Maschke’s website, www.antipolygraph.org , and downloaded his booklet, “The Lie Behind The Lie Detector”. Half of the subjects (bothinnocent and guilty) were given copies of the booklet after the commission of a mock crime, and they had two weeks to read and digest the information that George so graciously provided. The other half of the subjects were not given anything to read – they were simply asked to return after two weeks to take a polygraph exam.

Honts, C. R. and Alloway, W. R. (2007) Information does not affect the validity of a comparison question test. Legal and Criminological Psychology, In Press.

(Legal and Criminological Psychology is a journal of the British Psychological Society.

Copies of this research report can also be obtained from their website,    www.bps.org.uk