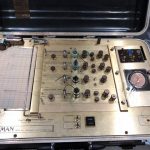 A lot has changed in the industry due to the research that has gone into the techniques and validated methods that are used to polygraph someone today. Accuracy levels have risen greatly, now a single-issue lie detector test is 92% to 95% accurate. Most Governments now have polygraph programs, in the UK there are more Government employed examiners than there are private examiners. The UK Sex Offender Polygraph Program has put over 170 sex offenders who were on probation back behind bars it has been that successful.

There are four main brands of Lie Detector Test Machines available today and quite simply put they all do the same job, some excel in different areas. Lie Detectors UK use Stoelting CPS Pro polygraphs however Limestone, Lafayette and Axciton also make computerized Lie Detector Machines that are used by other qualified APA Examiners. Whilst it is not mandatory to use a computerized polygraph it’s something a consumer should be aware of and ask for, all qualified UK Examiners use the latest polygraph machines.

Lie Detectors UK comprises of three fully qualified Examiners who test UK wide and have their own offices at which they charge £399 for a lie detector test. They are all members of the APA and the BPA which denotes not only quality but experience. Call today and discuss your case with an examiner on 0207 859 4960. Or book online here.